by admin
in Uncategorized
0

Jigme Singye Wangchuck (born 11 November 1955) is the former King of Bhutan. He was the fourth Dragon King (Druk Gyalpo) of Bhutan from 1972 until his abdication in 2006. He is credited with many modern reforms in the country.

He acceded to the throne at the age of seventeen, in 1972, after the sudden death of his father, Jigme Dorji Wangchuck. When he was formally crowned on 2 June 1974, he was the youngest monarch in the world at eighteen years of age, and the coronation was notable for the presence of foreign dignitaries, thus signalling the end of the long isolation of the country. He was educated in Bhutan and the United Kingdom. He attended Rice University in Houston, Texas.

It has been noted that the fourth king ruled his people with views based on the traditions of Buddhism. Joining the United Nations early in his reign was a major step in the modernization process started by his father.

Almost 30 years ago, long before “positive psychology” became a boom in the West, King Jigme, suggested that nations be measured by “gross national happiness”; the rich are not always happy, after all, while the happy generally consider themselves rich. 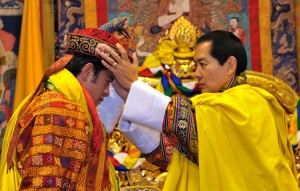 On 17 December 2005, (at the age of 50), he announced his intention to abdicate in 2008, leaving the throne to his son. During the last year of his reign, he sent every household in the land a new draft constitution that allowed for his impeachment. In a royal edict issued on 14 December 2006, the king announced that he would begin handing over power to his eldest son Jigme Khesar Namgyel Wangchuck immediately. He had ordered a parliamentary election to be held in 2008.

Joining the people of Bhutan on this auspicious day, we thank our fourth Druk Gyalpo for his compassion, love and care for his people; for the farsighted vision, enlightened leadership, selfless sacrifices and dedicated service for the well being of our country; for the inspiring and compassionate gift of Gross National Happiness;  for our free and valuable education and health care system; for promoting and preserving our unique values and culture…

To our beloved King, who always placed the needs and interests of the people before your own, may you live a long and healthy life.

Happy Birthday to the Fourth King of Bhutan, His Majesty Jigme Singye Wangchuck.